The next Connecticut income tax debate is heating up — but not at the Capitol.

“As much as Governor Lamont doesn’t want to go there, there’s a new appetite for this,” said Rep. Anne Hughes, D-Easton, co-chairwoman of the House Democratic Progressive Caucus. “I think the pandemic has changed everything.”

Hughes, who joined Connecticut’s labor leaders and others in a late morning teleconference calling for tax reform, said the argument that wealthy residents would flee the state in the event of a tax hike has never been more flawed.

“Where are they going to flee to? Florida, where they’re going to get infected?” Hughes said. She added that growing interest in Fairfield and Litchfield real estate markets suggests wealthy New Yorkers are fleeing to Connecticut to avoid the widespread concentration of COVID-19 cases in New York City.

The Lamont administration projects the coronavirus-induced recession will consume the state’s entire, $2.5 billion budget reserve — and still leave a $500 million deficit during the fiscal year that begins July 1.

Lamont, a Greenwich businessman, has said repeatedly that raising taxes on Connecticut’s wealthy would prompt them to leave the state

The governor worked during his first year in office in 2019 to kill a proposal from fellow Democrats on the legislature’s Finance, Revenue and Bonding Committee to raise income tax rates on investment-related earnings among Connecticut’s top earners.

Capital gains and dividends can fluctuate significantly with the economy and Lamont warned in a briefing last week about the risks states face due to revenue volatility.

The governor’s chief of staff, Paul Mounds Jr., told the CT Mirror last week that the administration also remains very concerned about keeping its tax rates competitive with those of neighboring states like New York, New Jersey and Massachusetts.

Lamont, who must give legislators a plan in February to balance the next two-year state budget, already has said he will seek help from labor unions to reduce costs. 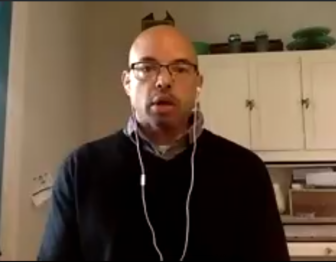 “I don’t think the union members are ready for a fourth round of concessions at this point,” Sal Luciano, head of the Connecticut FL-CIO, said during the press conference. He added that Connecticut’s impending deficits are too large to be solved chiefly with spending cuts.

Rob Baril, president of SEIU Healthcare 1199NE, the state’s largest healthcare workers union, said many state employees risk exposure daily to the coronavirus in prisons, group homes, psychiatric hospitals and other facilities. After granting concessions in 2009, 2011 and 2017, he said, they should not have to do so again.

“All we’re asking is that the state of Connecticut show some balance,” he said. “We continue to make the poor, poorer and the rich, richer.”

In recent years, progressive caucus proposals to shift the balance through higher state income tax rates on the wealthy bogged down at the Capitol.

Republicans, who hold minorities in the House and Senate, universally have opposed nearly all tax increases.

And with growing numbers of Democratic legislators hailing in the past four years from affluent communities on the shoreline and in western Connecticut, Lamont has had plenty of allies to block tax hikes on the rich.

Rep. Josh Elliott, D-Hamden, who also serves on the progressive caucus, said there is support for a more progressive tax system among the voters. He believes nothing will change unless more communities make their voices heard at the Capitol.

Back in 2009, Quinnipiac University found 71% of voters favored a proposal to raise income taxes on couples earning more than $500,000 — and 55% of those polled rejected the argument it would spur the wealthy to exit Connecticut.

“I just think Governor Lamont doesn’t believe in this” more progressive tax concept, Elliott added. “But if he really does think about running for office again, he will have to acknowledge what others groups want.”