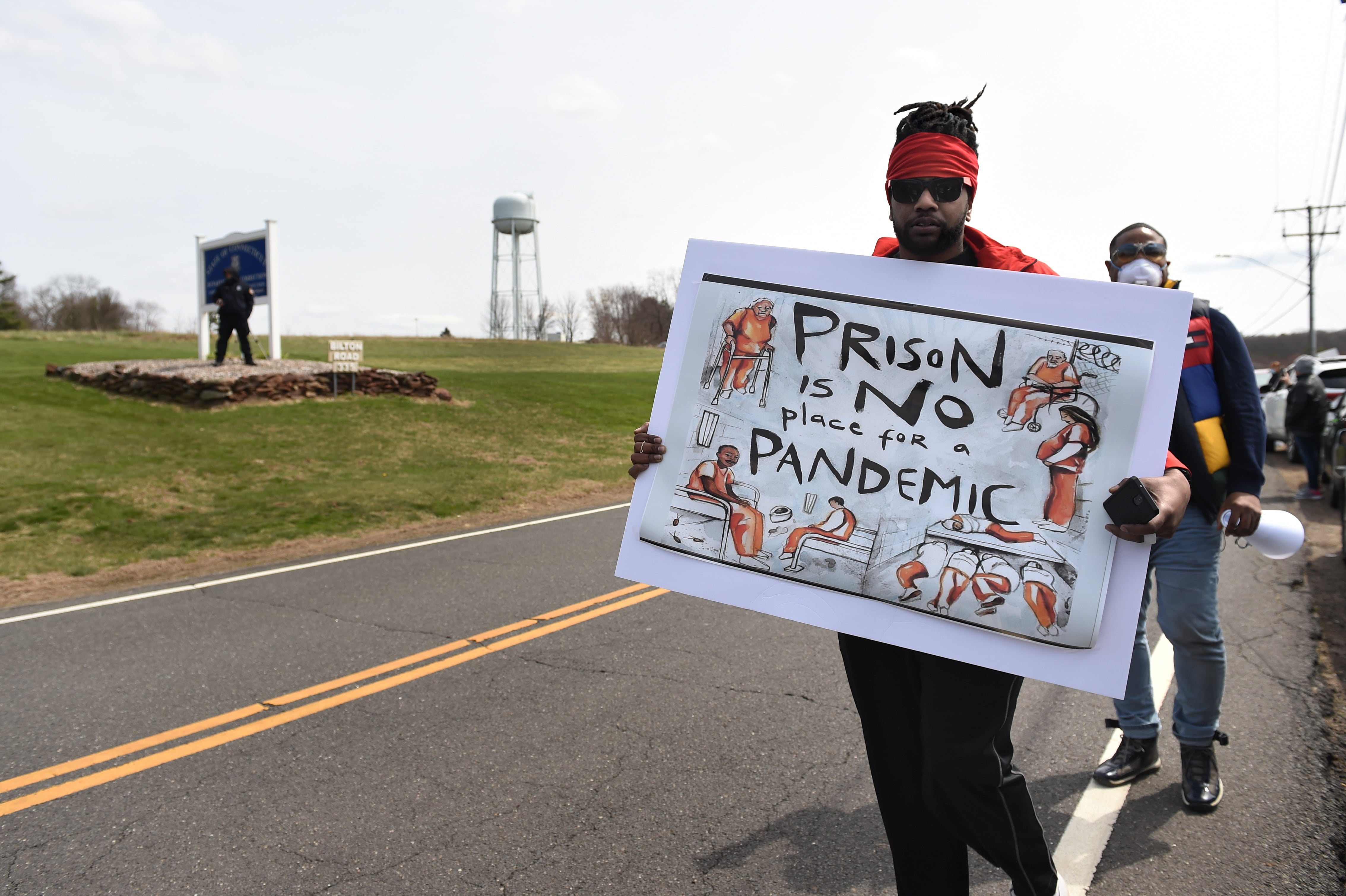 CLOE POISSON :: CTMIRROR.ORG Protestors carry signs during a protest in front of Northern Correctional Institution in Somers demanding the release of prisoners at risk of infection from the pandemic.

When prison officials found Daniel Ocasio lifeless on his bunk last week at the Corrigan-Radgowski Correctional Center with a COVID-19 mask wrapped around his neck, he became the third incarcerated person to die by suicide in Connecticut this year.

Ocasio, 32, had only been at the Montville prison a week when he died, unable to raise the money to pay his $10,000 bond after being charged with burglary and violating a protective order.

Ocasio’s death made national news because of the way he died — using a tool intended for protection as a means of his own destruction — but what it ultimately illustrates isn’t at all unusual but, rather, achingly familiar, say criminal justice advocates. Ocasio’s death, they say, highlights the danger of combining the cash bail system with strained mental health monitoring amid the pandemic – which, like many aspects of Connecticut’s criminal justice system, disproportionately affects people of color.

“Tragedy after tragedy, if this is not a wakeup call to completely redo our bail system to start making purposeful, intentional decisions, I don’t know what will do it,” said Alex Tsarkov, executive director of the Connecticut Sentencing Commission, which is currently completing a study on alternatives to the state’s cash bail system. “A $10,000 bond is a very low bond, and lots of people get released on that type of bond because you don’t have to put down a lot of money.”

The ACLU of Connecticut twice sued the state to get vulnerable inmates released to protect them from COVID. The group’s state lawsuit asked the court to order the immediate release of certain individuals held on low bond amounts, too. A judge dismissed it.

The ACLU’s federal class action lawsuit was more successful, but the settlement approved by the judge did not contain language specific to pretrial releases, though state statute allows the DOC commissioner to release some inmates, subject to certain conditions, if they’re being held on bond.

In a system like Connecticut’s, money is a proxy for risk. The more a person’s pretrial release allegedly threatens public safety, or the more likely someone is to skip their next court date, the higher their bond. In other words, those with lower bonds are considered less likely to be dangerous, or to skip town.

Bond amounts also reflect racial disparities in the state’s pretrial system. An analysis completed recently by the Connecticut Bail Fund with the Semilla Collective found that, as of June 7, the median pretrial bail amount for a white person was $75,500. For a Hispanic person, the median was $150,000. For a Black person, median bail amount was $151,250.

There were 283 people being held on bonds of less than $20,000 as of July 1. Those held on such low amounts could get out of jail if they raised 10% of the total amount, money they would get back if  they showed up to future court hearings. In Ocasio’s case, he would have needed to pay $1,000.

If someone held pretrial can’t cover 10% of their bond, they can usually post it by paying a smaller fee to a for-profit bail bondsman, who makes money by charging defendants in exchange for signing a document that gets them out of jail, pledging to cover the cost of the bond if the defendant doesn’t show up for court.

Tsarkov crunched the numbers, estimating that someone in a position like Ocasio’s could have put in roughly $297 as a down payment and then footed the rest of the bill through a payment plan, provided a bail bondsman was willing to take him on as a client.

“It is the bondsmen who decide which defendants will be acceptable risks,” Tsarkov said. “The system’s delegation to bondsmen of a decision to release or detain an individual really undermines the whole criminal justice system. The goal of the commercial bonding agent to maximize their profit is simply contradictory to the goals of an effective pretrial justice system.”

Correctional facilities’ mental health services have been limited during COVID-19, potentially making it harder for prison staff to notice if an inmate spirals into crisis.

In an internal email sent March 18, Thomas Kocienda, the DOC’s director of Behavioral Health Services, told mental health staff that group programming and regular mental health assessments were suspended due to the pandemic, except when it came to children. He also said “routine ‘elective’ individual outpatient psychotherapy” for inmates with a mental health score of 3 or below is suspended until further notice, unless their clinical needs require it.

An explanation of the Department of Correction’s mental health scores. Due to the pandemic, officials have suspended individual outpatient psychotherapy services for those with scores of 3 or lower, unless clinical needs require it to continue.

Individuals with a score of 3 or below make up 96% of those imprisoned, according to a report published by the Sentencing Commission in July.

Kocienda directed all Behavioral Health Services staff to be available for suicide risk assessments and crisis interactions; written requests for mental health services would be triaged as needed.

The pandemic has forced mental health staff to perform cell-side triages, assessments and check-ins, said Shirley Watson, a licensed clinical social worker at MacDougall-Walker Correctional Institution. They whisper through the cracks in the door, Watson said, to “try and establish some semblance of confidentiality,” but the limitation can make it hard for the incarcerated patients to feel like they’re in a safe space. Pre-pandemic, inmates received services in Watson’s office, not from behind a locked metal door.

“I call it ‘drive-by therapy,’ because you really can’t get any substantive information on an inmate and their health,” Watson said. “This is not what I signed up for, to be standing outside of a cell door trying to help people and knowing that you’re as handcuffed as they are.”

Watson said on Monday she performed her last cell-side check-in over the weekend. From now on, she can see patients in her office. But with a staffing shortage at the prison, it’s going to be hard for her patients to get an escort. And she’s going to have to find a new space where they can practice social distancing, because her current office isn’t big enough.

Complicating all of this is that a person’s mental health score often stays the same throughout his or her incarceration, Watson said, unless they have a psychological crisis or an especially observant correction officer notices something is wrong.  That means if someone is given a mental health score of 1 or 2, the burden is on the incarcerated person to reach out to prison staff and tell them they need support.

“If they don’t ask for help, then they’re not on our radar,” said Watson.

Source: Connecticut Sentencing Commission. Toggle the buttons above to see the distributions for different racial groups and how they compare with the total distribution, in grey above; darker green areas indicate overlaps. Credit: Kasturi Pananjady

Andrius Banevicius, spokesperson for the Department of Correction, said inmates continue to be assigned a mental health score during the intake process. He also said group therapy services have resumed for groups of five or fewer, not counting a facilitator.

“There is really no mental health counseling happening anymore unless someone writes to a mental health counselor asking to be pulled out of their cell because they are imminently suicidal,” said Alex Flemming, a 24-year-old incarcerated at Northern. “There is also a buzzer to press but no one really answers those.”

The founder of the Connecticut Prisoner Advocacy Network, a group of more than 30 family members who have incarcerated loved ones, said mental health services have been even less accessible than before the COVID-19 outbreak.

“I can tell you they wait a minimum of three months to get an appointment to see a doctor when they need one,” said the advocate, who asked that her name be withheld to protect her family member from retaliation.

Another challenge imposed by the pandemic: prisons and jails have become even more isolated since COVID-19 began. Family visits have been suspended since March. Inmates get two free phone calls each week, but once those run out, they need to have money to keep in contact with friends and family, a costly service that could be out of financial reach for those spread thin because of the virus’ impact on the economy.

The prisoner advocacy network has been lobbying the Department of Correction to resume family visits, which, according to The Marshall Project, nine states have done. The group’s founding member said the loneliness and isolation is apparent whenever they talk to their loved ones on the phone.

“You can hear it in their voice,” she said. “You can hear how much they miss their wives, their mothers, their children.”

The Connecticut Bail Fund set up a hotline to hear from those weathering the virus from behind bars. Callers have told them their medical concerns have been ignored, expressed concern over the state of the cleanliness of their living spaces and alleged that prison staff have unjustly removed their personal items.

All those stressors, said Brett Davidson, the group’s co-director, are traumatizing experiences for those living in correctional facilities. And they’ve all been exacerbated by the pandemic, as court dates have been pushed back and it’s become even harder to keep in contact with their attorneys.

“It just feels like the walls have thickened as a result of the pandemic,” he said.

Trapped between those walls are people like Ocasio, where the only thing standing between them and freedom is a few hundred dollars. Davidson’s organization has bailed out 90 people since the beginning of the pandemic, so they can await the resolution of their criminal case at home or in the presence of their family.

“For us, bailing people out is about creating conditions where people can actually defend themselves,” Davidson said. “It’s about countering the state’s brutality, and showing people that the system does not speak for the community.”