SEBAC and the Lamont Administration have completed their discussions on
pension re-amortization in accordance with the recently passed biennial budget
and have reached an agreement. It keeps the parties’ commitment to make no
change in pension benefits.

The agreement will be submitted to the General Assembly for approval.
This is part of our continuing effort to work with the Lamont Administration on
“win-win” solutions for achieving efficiency that will benefit everyone.
Completing the re-amortization of the state pension fund, adjusting the schedule
to pay off Connecticut’s pension debt, will help stabilize state pensions and
ensure obligations to current and future retirees are fully funded; it was included
in the recently passed budget along with re-amortizing the Teacher’s Retirement
Fund.

None of the proposed savings would result in changes to the pension and health
insurance benefits of state employees or retirees.
SEBAC will not be part of asking for more sacrifices for state employees, who
have already given so much for the people we serve. Our 2017 agreement is
saving Connecticut taxpayers $25 billion over the next 20 years, helping to close
the chronic budget deficits that imperil vital public services.

The Economic Benefit of Defined Benefit Pensions in Connecticut 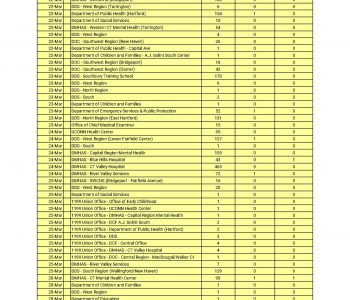