Getting by with the ‘grace of god and caffeine’

It’s been more than a year since COVID-19 came to Connecticut, and Kara O’Dwyer is just barely making it all work.

With three jobs, an eighth grader learning at home and a mom in a high-risk category, she’s found herself at the whims of government aid — the stimulus checks and boosted unemployment benefits — and Medicaid home-care contract negotiations.

“I have been severely overwhelmed,” said O’Dwyer, 39, of West Haven. “I have steadily still been working my home-care job and working at the spa, and trying to manage homeschooling, and I just started a new private home-care job and changed my hours with my other one.” 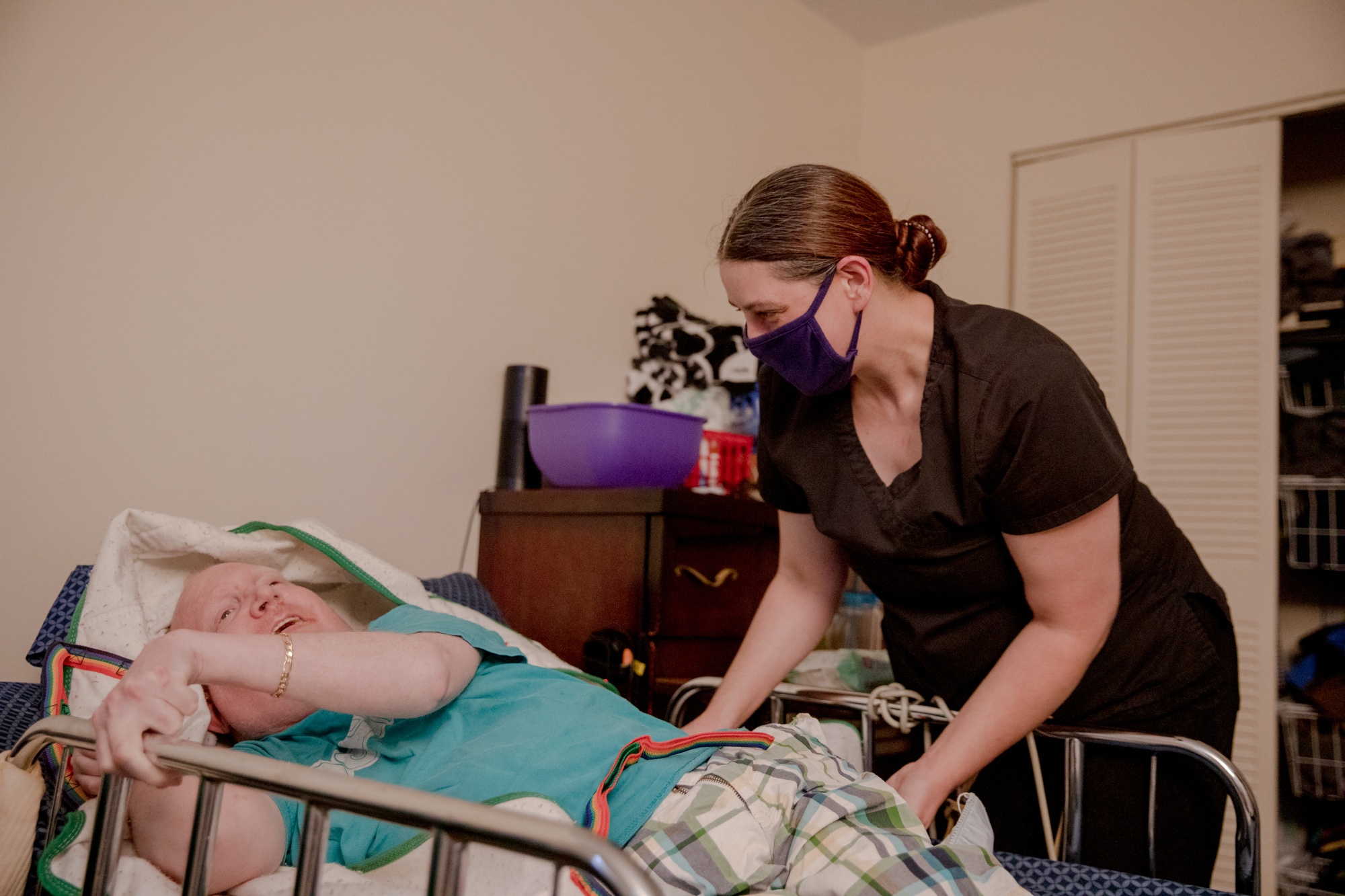 Kara O’Dwyer helps one of her home care clients, Michael Whelan, get out of bed on Aug. 22, 2020. YEHYUN KIM :: CTMIRROR.ORG

“Especially now, our role is super important because they want people who are at risk to be at home,” O’Dwyer said in August. 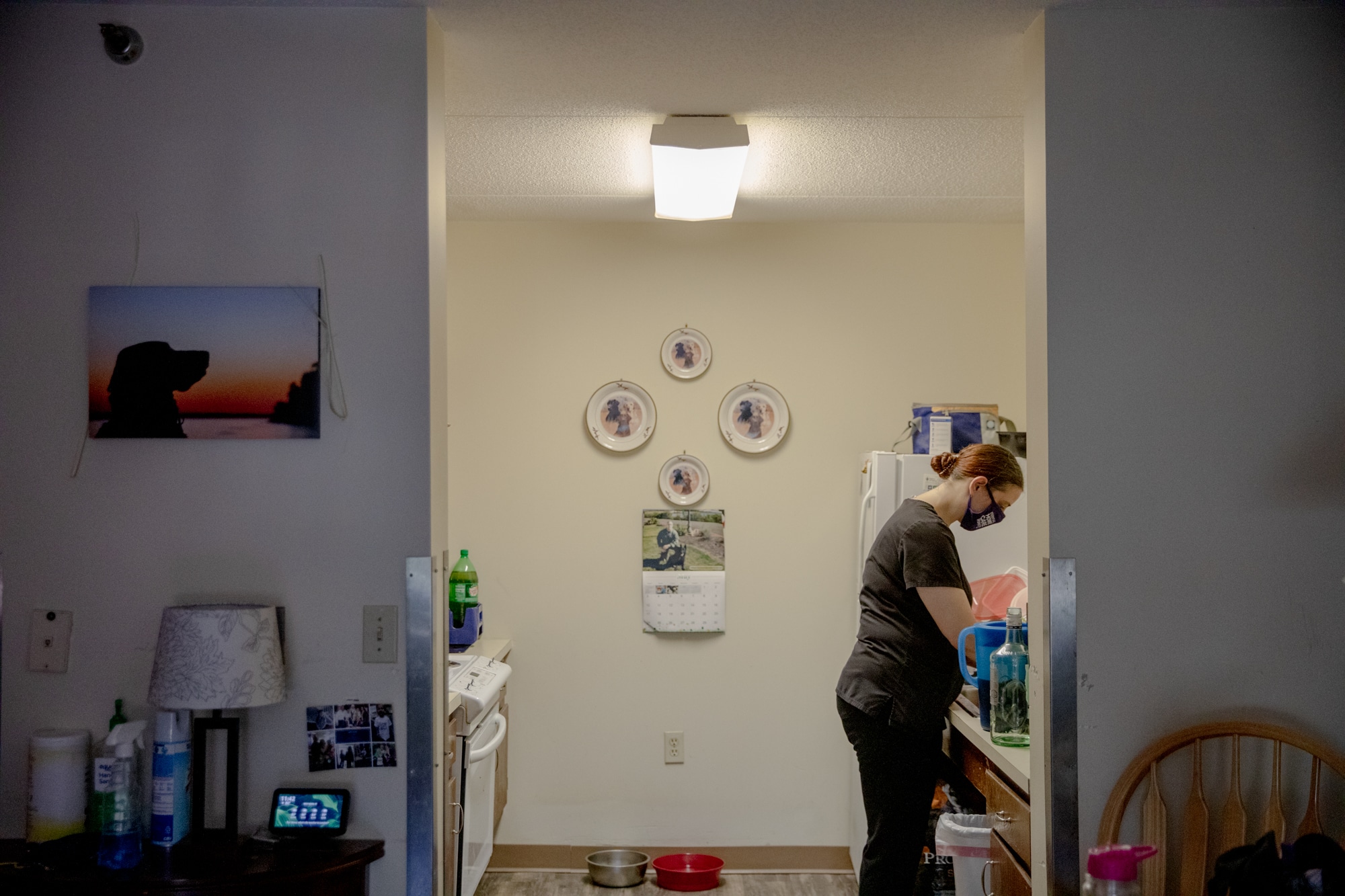 Kara O’Dwyer does the dishes for her home care client. YEHYUN KIM :: CTMIRROR.ORG

“It’s absolutely exhausting,” she said about her long work hours. “We don’t really have much of a choice.” O’Dwyer tries to have at least one day  off, but she often ends up working seven days a week.

How does she juggle it all?

“By the grace of god and caffeine.”

This juggling act predated the pandemic, but it became far more precarious when her son started learning from home and her work as a masseuse was temporarily halted. Additionally, her home-care job became high risk in the early days before PPE was widely available.

“Being that I got my income tax return and my stimulus checks and everything, I’m still above water,” O’Dwyer said in March. “[But] hardworking people shouldn’t have to be working two and three and four jobs and barely making it and still being on state assistance.”

She wishes the state would raise its Medicaid reimbursement rates and bolster benefits for home-care services, what she calls a vital role with few protections and little recognition.

[Life has never been easy for single moms. The pandemic made it harder.]

“We need more funding, and we need people to know who we are, especially home care and group home workers,” she said. “It’s been nerve wracking and crazy, and we just keep doing it because it’s a labor of love. Not everyone’s cut out for this work, so the people who are need to push forward, even when we’re not being seen and heard – and paid.” 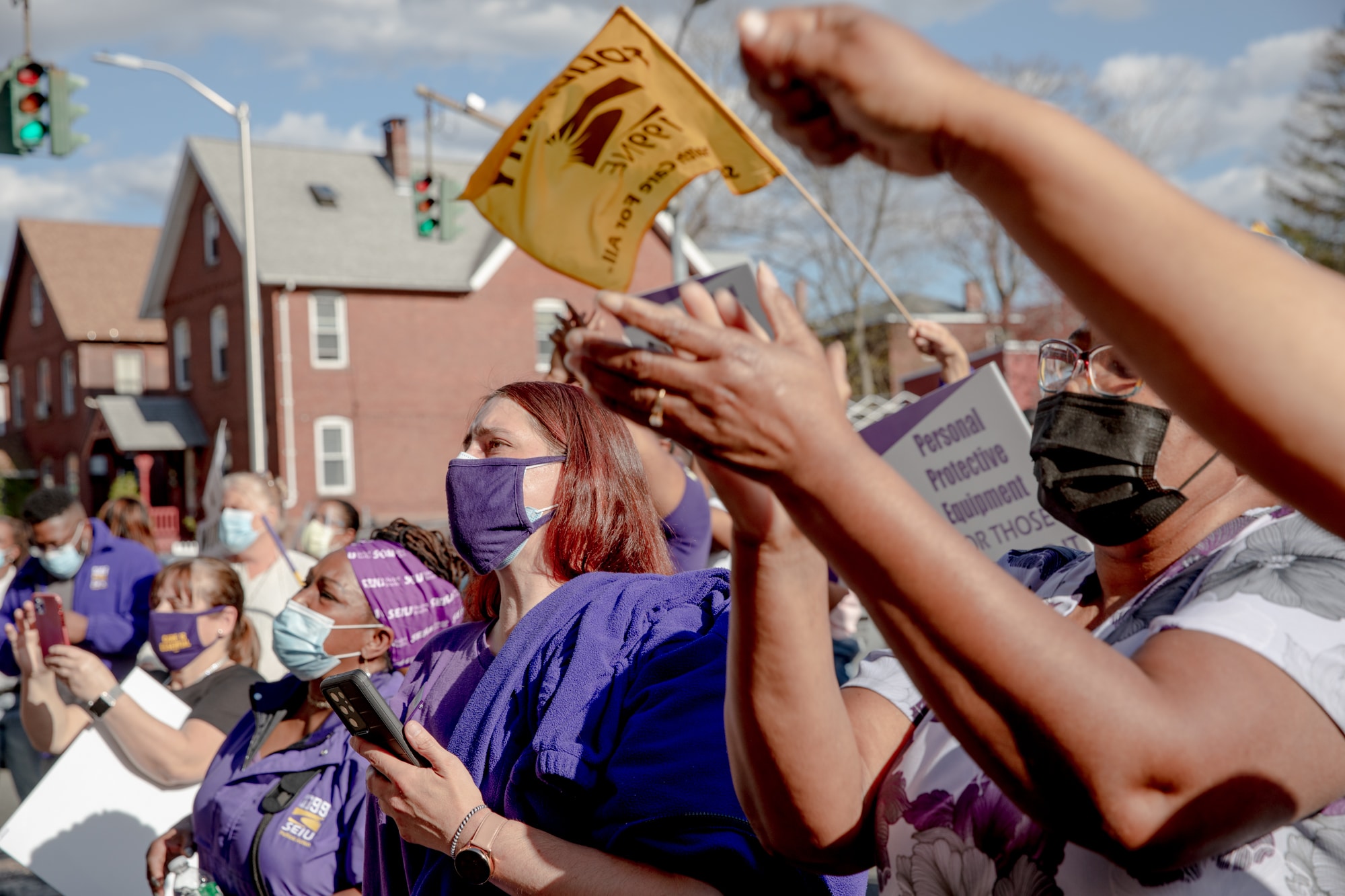 The drumbeat of uncertainty wears on O’Dwyer, who lives with her mom, 57, and her 13-year-old son, Devin Geyer, in a two-bedroom apartment. Sometimes, she spends nights at her boyfriend’s house nearby. Between two jobs, two households, and helping Devin with schoolwork – she’s watched YouTube videos to refresh her 8th-grade math skills – O’Dwyer is lucky if she’s asleep by 2 a.m. on any given night.

“I have the new job eight to 10 every morning, Monday through Friday. I have at least one, if not two or three, massages to do. And then in between I try to do what I can with my son, and then I work something like 9 or 10 until midnight, one o’clock” with her long-term home-care client, she said.

[‘Are we just going back to women bearing the brunt of all this?’]

“It’s difficult just trying to maintain something when everyone’s working several jobs and now we have to be teachers too,” she said. “Something’s got to give.”

So far, nothing has – when O’Dwyer isn’t at work, she is helping her son navigate more than a year of living through a screen.

“It’s been really kind of up and down for both of us,” O’Dwyer said. “He didn’t take online schooling seriously really at all, and I feel like I basically ended up doing most of the work for him just to make sure he was able to pass.” 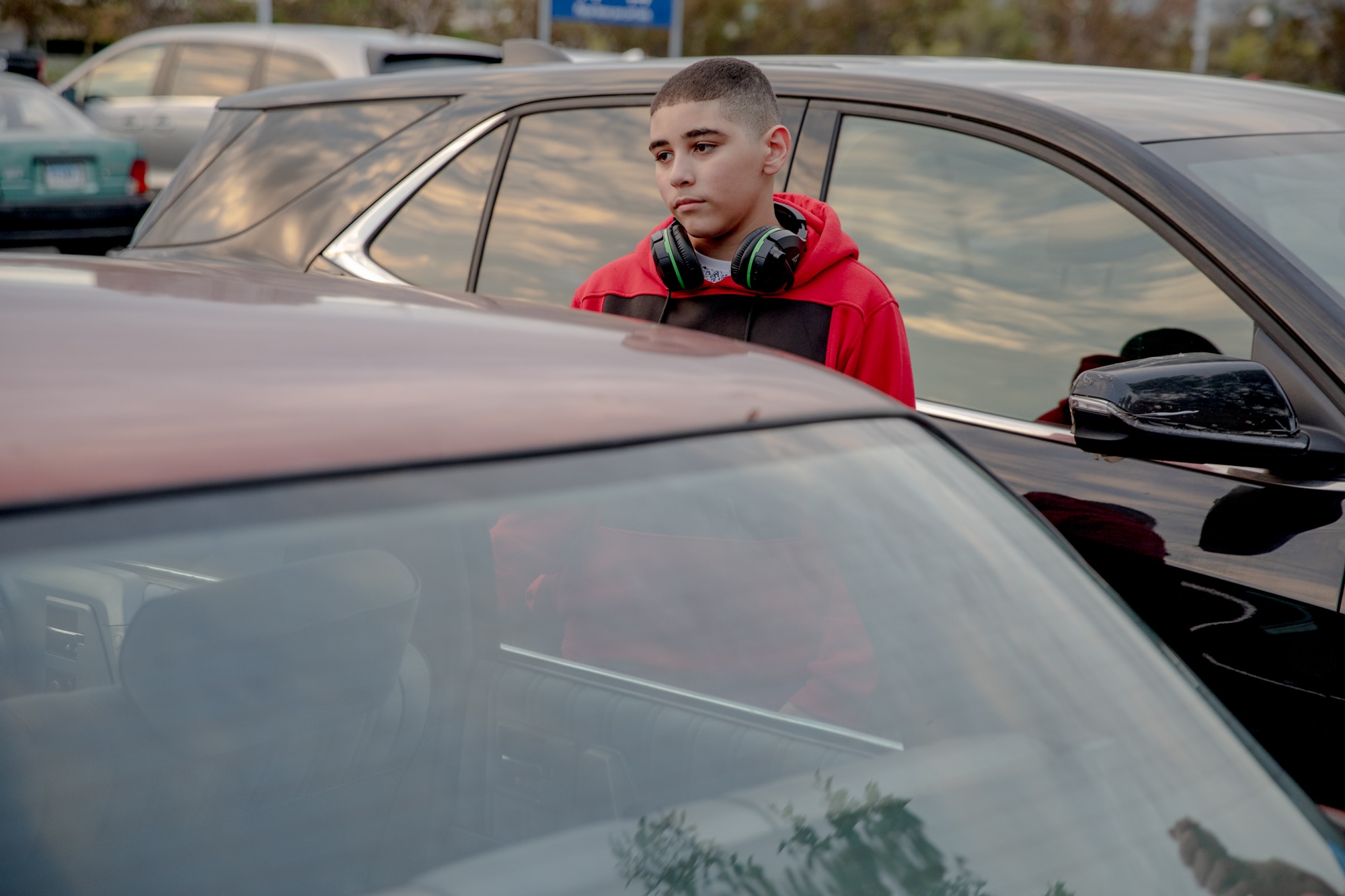 Devin Geyer, 13, stays home most of the time, often alone when his mom and grandmother are at work. “I feel bad when both of us are at home, either of us is sleeping or frustrated with online schooling,” O’Dwyer said. Having to work three different jobs that include morning and night shifts, O’Dwyer takes naps between her shifts at home. YEHYUN KIM :: CTMIRROR.ORG

This academic year, West Haven is doing in-person learning, but students have the option to remain fully remote. O’Dwyer and her mom opted for the latter, because they are nervous about taking on more risk. Her mom is also a home health aide, and a grocery store employee, and all three members of the family have asthma.

“I do sometimes worry for my Grandma, because there are those people who don’t like wearing masks,” Devin said, causing O’Dwyer to launch into an anecdote about a mask-less customer accosting her.

[‘When a storm comes, you just get blown over’]

So he muddles through his classes online. O’Dwyer hopes he is able to attend one of the state’s technical high schools in-person next fall.

“If he doesn’t like the voice of the person who’s doing it, he can’t focus on the work or the message,” O’Dwyer said. “If anything gets too confusing, he kind of freezes up and has a hard time coping. A lot of times, I’m not there, and for part of the time, my mom’s not there either.” 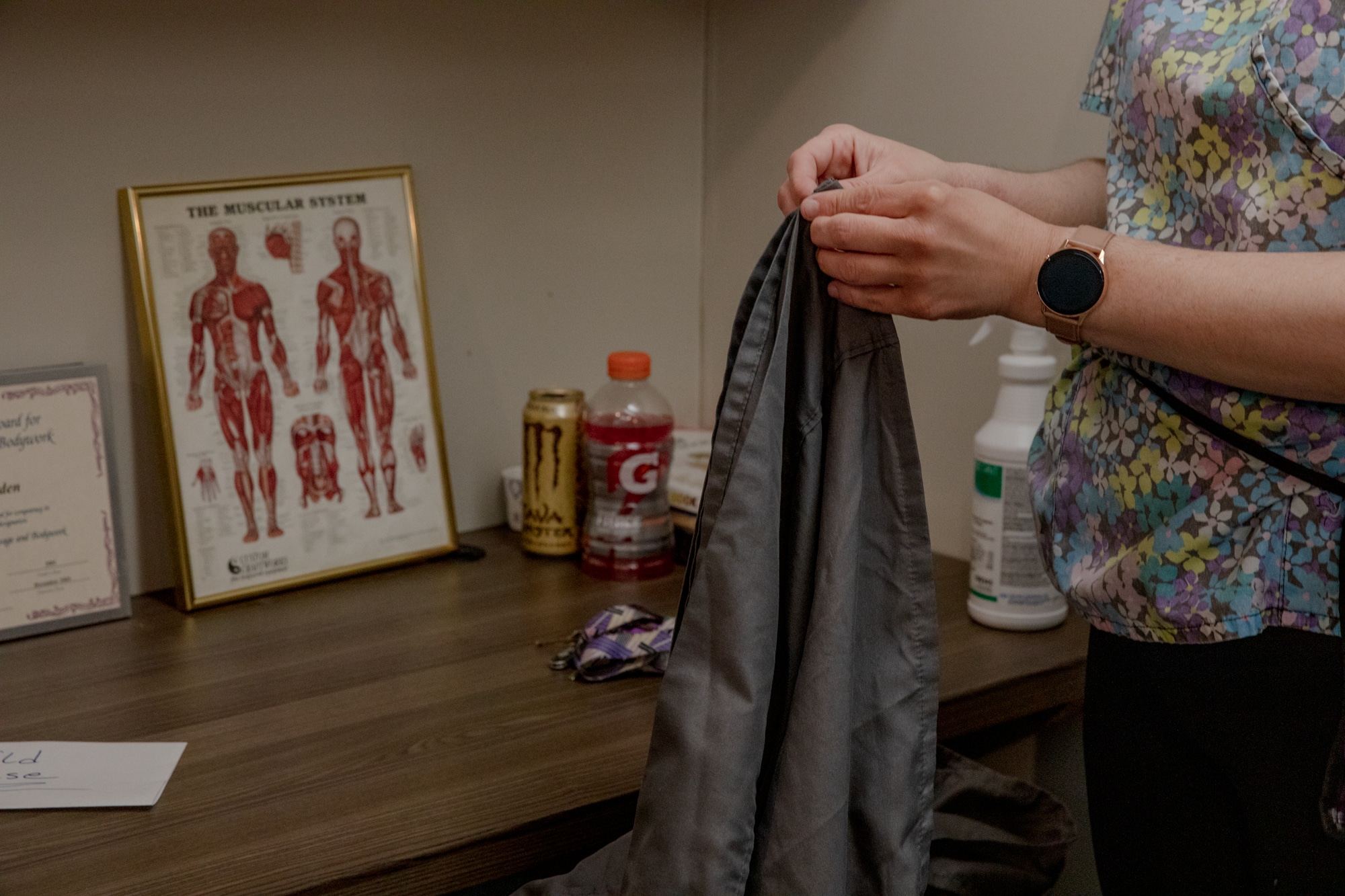 O’Dwyer folds clothes at a massage shop job she works on Sunday afternoons. Energy drinks she consumed that morning sit on the table. O’Dwyer drinks them every day. “If I don’t have something that helps me with my energy, I’ll be falling asleep on people and lose my job,” O’Dwyer said. “I can’t have that. That’s why I’m addicted to these disgusting things.” YEHYUN KIM :: CTMIRROR.ORG 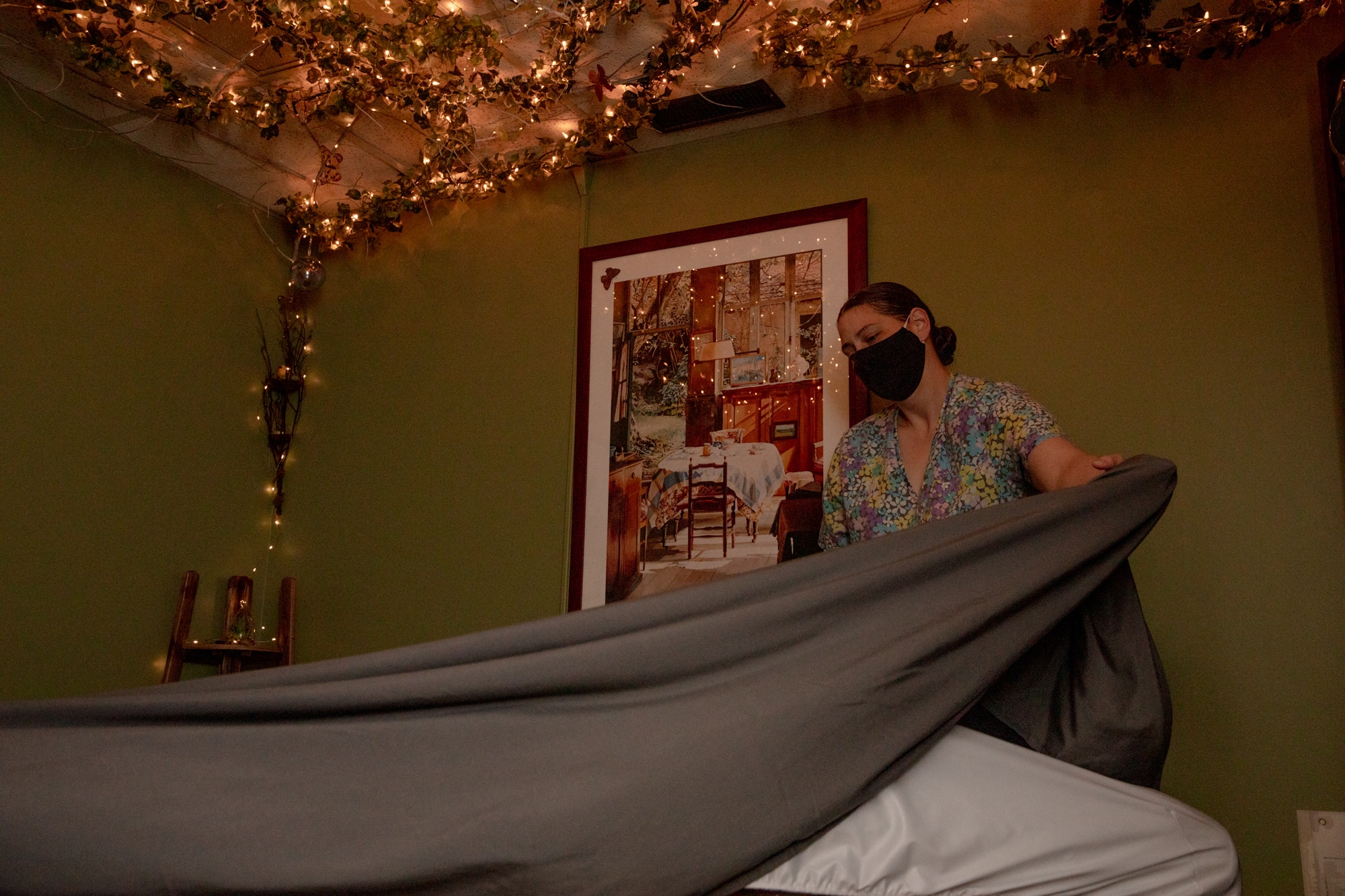 O’Dwyer said she is always sleep deprived working three jobs. One day she fainted in her car between shifts and was taken to a hospital.

After class time, Devin plays online video games — Fortnight, Roblox and Rainbow Six Siege — to keep connected to his friends. The latter is a first-person shooter game. O’Dwyer isn’t thrilled about that, but she’s resigned to the situation.

“I figure if they’re doing it in there, they’re getting their frustrations out in there,” she said wryly.

Devin appreciates being able to make his own sleep schedule without needing to catch an early school bus, but he said he misses some of the friends he only spoke to in-person. And he misses being able to go to the movies or restaurant buffets on weekends he spends with his dad. 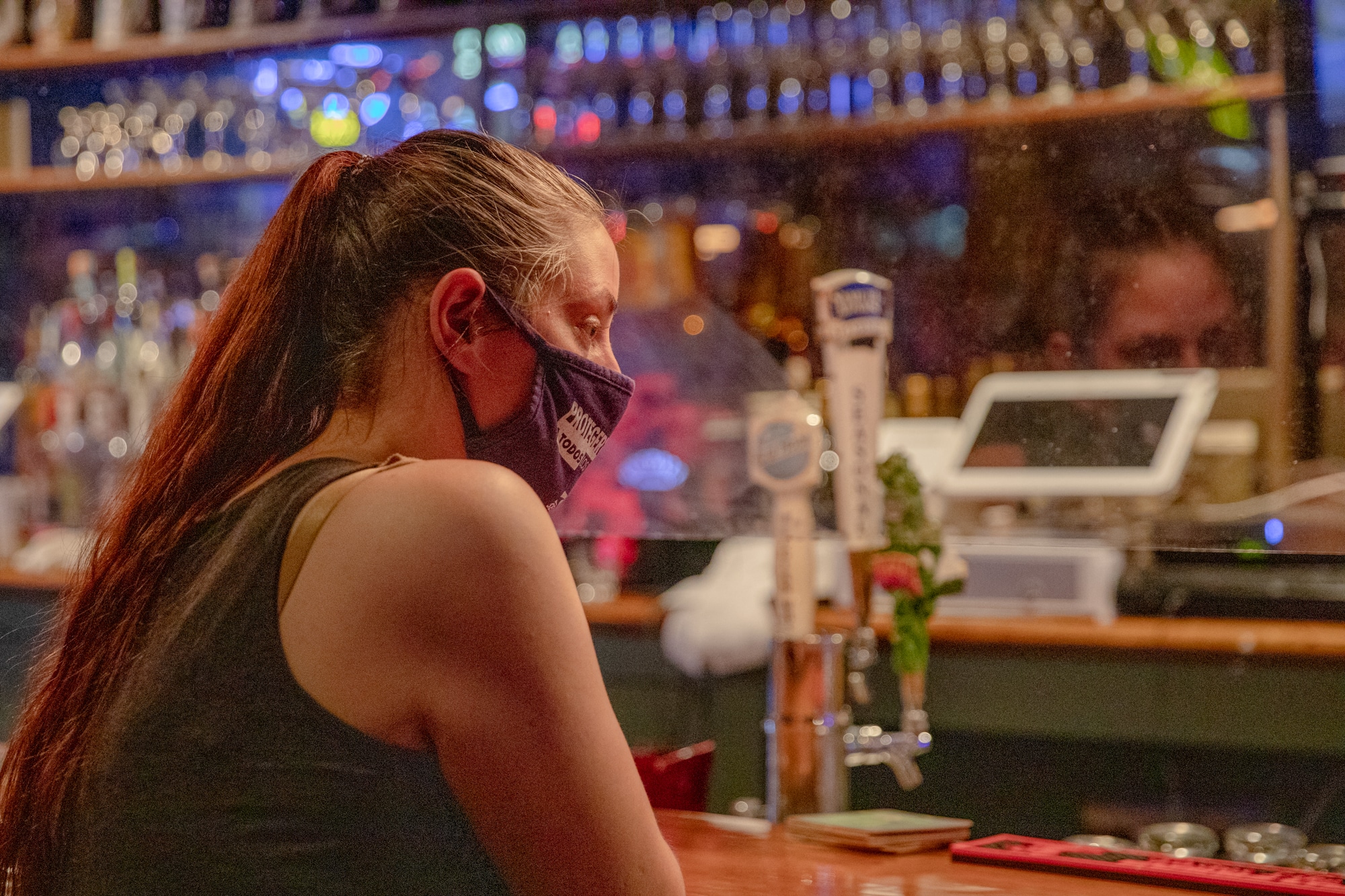 Kara O’Dwyer on a rare day in September she took off and went out to celebrate her boyfriend’s birthday. YEHYUN KIM :: CTMIRROR.ORG

“I want to get the vaccine,” O’Dwyer said. “But it’s difficult because I’ll have to take a couple of days off from work. And I don’t know if I could afford that.”

“The places that we go are limited,” he said.

Though the adults in the household are vaccine eligible, they are hesitant to get something so new and unknown, so the status quo holds for the time being.

“We’re still kind of hesitant for various reasons,” O’Dwyer said. “I would say my biggest concern is the fact that I would have to arrange to have a couple of days off in case I have a reaction, and that’s not really doable right now… I’m willing to get it but I don’t want to rush out there and be one of the first in line, either.”

Editor’s Note: This is one of four stories published today examining the impact of the COVID-19 pandemic on single mothers. Photographer Yehyun Kim and reporters with the CT Mirror tracked the lives of the three women profiled in these stories over the last nine months, interviewing and photographing them as they experienced lockdown with their children and as the state began to open up last month. A podcast featuring two of the women in this series can be found here.