The New England Health Care Employees Union, District 1199, SEIU, delivered strike notices at group home agencies Whole Life and Network with a deadline to begin striking on October 5th at 6:00 AM. Combined, the two agencies cover some 70 locations across the state with more than 500 union workers going on strike for new contracts.

“The State of Connecticut stepped up and provided funding that was adequate. Now it’s time for these agencies to do the same: to provide people with pensions, affordable health insurance and enough wages that people can take care of their families,” said Rob Baril, president of District 1199 New England, SEIU. “Otherwise we are prepared and the workers are prepared to strike to make the progress that they need to be able to feed their families. This is a time where essential workers have made incredible sacrifices, unspeakable sacrifices, to be able to take care of folks who are vulnerable. And these agencies need to step up and value those workers.”

Whole Life and Network workers and the majority of their colleagues at similar group home agencies are making $14 to $15 an hour caring for individuals with physical and mental disabilities in a long-term care setting that remained severely underfunded for the past 15 years.

“It’s a workforce that is overwhelmingly female, that is majority Black and brown, with the remainder being working-class white folks, and they toil in poverty. The funding that we were able to achieve will make some progress in wages,” said Baril on the Union’s Bill of Rights campaign to improve long-term care services for Medicaid recipients in Connecticut. “But ultimately we’re talking about the workforce capping out at $17.25 an hour next year. People are literally working themselves to death. There are workers in this industry that average 80-, 90- and in some cases we’ve met people who average a hundred-hour work week. There needs to be change.”

District 1199 New England nursing home workers were able to settle dozens of new contracts during the summer after securing millions of dollars in additional funding from the state. But the Union’s 4,000-plus group home workers keep working with expired contracts. Network’s contract expired in March 2021, and Whole Life workers have worked without a new contract since 2019 due to lack of funding.

“I’m joining the strike because there just needs to be a change. With the majority of the workers being Black and brown people I feel that we don’t get the respect that’s needed,” said Alissa Taylor, a $14.75-an-hour caregiver at Whole Life paying $500 monthly for individual health insurance. “I’d love to see corporate and the big guys at Whole Life live off of $14.75. It’s not possible.”

“I’m working between 116 to 140 hours every two weeks just so I can pay for my health insurance and the stuff I need for my kids. I have six kids that I have to take care of and six grandchildren,” said Whole Life caregiver Sherry Delorme with 18 years of service.

“We are now ready to strike on the 5th of October to get what we had already won back in June. We are tired. We are stressed. And we are struggling to get through the day. We cannot survive on this pay and unaffordable insurance, even while working full-time hours,” said Kevin Mackie with 32 years of service at Network. “There was a time when our pay represented the work we did at Network. I personally have to work an extra 20 to 30 hours a pay period to just get by.”

New contracts that show the additional state funding in improved wages and benefits will place workers in a much better position to care for themselves and their families with one job and reasonable working hours, and will allow agencies to recruit and retain a workforce with enough resources to do away with excessive mandation and short-staffed schedules. With negotiations facing undue delays at other agencies, more group home workers are preparing to strike along with District 1199 members at Network and Whole Life.

“All of us are going to get to the point where we can no longer work. Folks should not have to figure out whether they’re going to be working into their late 60s, in some cases into their 70s, or making choices between whether they are paying their rent or putting food on the table for their families. Far too many people who are in this industry are having to make those choices. It has to change,” said Baril. “It’s time for the agencies to come to the table with an offer that provides workers with the same respect and dignity that each and every CEO at these companies expect.” 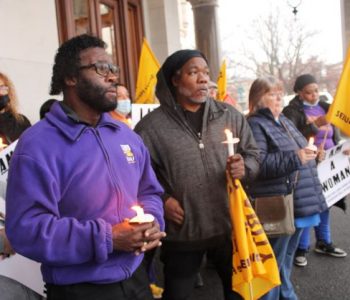